The Unpluq Tag will soon also work on iPhones. We aim to release our iPhone app in Q1 of 2023. You can already order the Tag if you want to join our beta test which opens in February of 2022.

To be notified about any news and updates regarding Unpluq for iPhones. Learn about the Tag

We originally planned to release our iOS app in Q3 2022. However, while beta testing our iOS app, Apple’s iOS 16 beta came out. With this update, several critical and exciting new features became available that completely changed how we engineer Unpluq for iOS.

With past limitations in iOS, our original design involved blocking the web traffic (through a VPN) from your blocked apps—not interrupting when you try opening them (see image below). 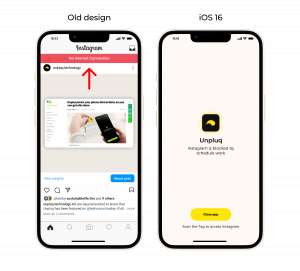 We believe this would be confusing and a little frustrating for most people. With iOS 16, we can now give people on iOS the same great experience our Android app offers.

In addition to a better experience when opening blocked apps, here’s a list of improvements that are now possible because of iOS 16.

As a result, we made a strategic decision to remake our iOS app so Unpluq for iOS is similar to our 4.3 star rated Android app. We believe this difference will be a 1000% better app and want to deliver the best experience for you.

We use cookies to give you the best experience. If you continue to use this site we assume that you are ok with it.OkPrivacy policy